A puck, and a gesture, worth their weight in gold 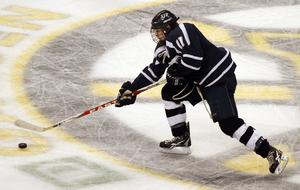 It only seemed fitting that our first true installment of "What Would Hobey Do?" would highlight a hockey player. In my work covering college hockey for ESPNBoston.com, I'm fortunate to witness acts of bravery and sportsmanship on an almost nightly basis. But few can compare to a heartfelt deed that Colin Blackwell, a senior captain of the hockey team at St. John's Prep in Danvers, pulled off last spring.

In a simple selfless moment, following what must have been a heartbreaking loss, Blackwell (captured above by old newspaper colleague Kirk Williamson) reminded us that true sportsmanship is alive and well at least in certain pockets of the game. Here's the Reader's Digest version: Blackwell's St. John's Eagles and Malden Catholic went toe-to-toe for state hockey supremacy last March at the TD Garden, home of the Boston Bruins. After regulation, the two squads were deadlocked, 3-3.

With 4:50 gone in sudden death overtime, Malden Catholic junior Brendan Collier snapped a backhander into the top corner, giving the Lancers a hard-fought 4-3 victory and the state championship.

Blackwell, who led all scorers during the Super 8 tournament with 16 points in five games (including a goal and an assist in the final), was undoubtedly crestfallen. The 5-foot-8, 164-pound forward, ESPNBoston's inaugural Mr. Hockey Award winner, finished the season with 33 goals and 33 assists for 66 points, and was a +42 during the regular season, garnering him Most Valuable Player accolades in the Catholic Conference.

But it was Collier who had the Midas touch that Sunday afternoon in March. Until Blackwell proved that champions aren't always measured in terms of wins and losses.

Moments after Collier's strike, Blackwell, stung by the abrupt, decisive end to his high school career, still had the presence of mind to notice the game-winning puck in the back of the St. John's net. Despite the wild celebration of the Malden Catholic players, Blackwell quietly collected the hard rubber biscuit, and handed it to the parents of Malden Catholic senior captain Mike Vecchione, a childhood friend of Blackwell, asking them to make sure Collier got it. Honestly, I still get goose bumps just writing that sentence. There was no fanfare, no television cameras, no Hollywood script. It was just a young man who knew, intuitively, that Collier deserved to have that memento.

I first learned of Blackwell's magnificent gesture when a friend tipped me off to a column by Danny Ventura in the Boston Herald. But since the Herald charges an "archive fee" for any article more than two weeks old, I can instead refer you to a fine article by Josh Zywien for the North Andover Citizen, entitled "An Eagle Stands Tall." Zywien writes how Collier got a hold of Blackwell's cell number, and texted him a simple but poignant message: "Thank you."

"He didn't have my number, so he had to go out of his way to find it," Blackwell told Zywien. "He just said thank you, and mentioned how much it meant to him. I think that said a lot about him, too. He didn't need to do that."

Blackwell also gave Zywien a glimpse into the soul of a true sportsman. "I just knew that if I had scored that goal, I would have loved to have that puck," he said. "You can be enemies on the ice, but once the game is over I've always been taught to respect your opponents.

"Honestly, I don't know Brendan that well, but I know he's a great guy, and it was a great shot, so he definitely deserved to have that as a reminder," Blackwell said. "After you play a game like the one we played, you just feel privileged to be a part of it. I thought it was the right thing to do."

Whoever taught Blackwell, whether parents or coaches or both, should be proud. That Blackwell would think so little of his own gesture, and yet be so grateful for Collier's text message, speaks volumes about this young man from Andover. Hobey Baker surely, somewhere, was smiling.

"It would have been icing on the cake to win the Super 8," Blackwell told Zywien. "But I don't regret anything about that game. It was two great teams, with a lot of great players, and somebody had to win. The atmosphere was unbelievable, and it's something I'll always keep with me."

Harvard hockey coach Ted Donato must be thrilled to have Blackwell joining the Crimson this fall. Even if he only proves to be half the player that pro scouts think he might be – Blackwell was drafted in the seventh round by the San Jose Sharks (194th overall) – Harvard will have a natural leader stepping onto the ice for the next four years.